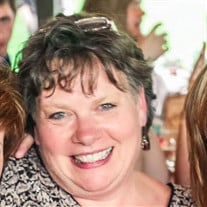 A good friend of Betsy’s once told her “Our time on Earth is borrowed: one’s impact is measured by if they leave this world a better place.” There are few that have left an impact as Betsy has. There is no doubt that she left this world a better place! Her two greatest passions were loving and giving to others. Anyone who knew Betsy knew just how greatly she loved and how generously she gave. She chose a career as a pharmacist so that she could fulfill these two passions every day. More often than not, her customers would leave the pharmacy with not only their prescriptions, but also with the warmth of a famous Betsy hug. Betsy died on December 8th at Geisinger Medical Centerafter fighting cancer for six months. Surviving her is her husband and love of her life Dennis, her three sons Luke, John and Ted, and her daughter-in-law Aimee. She is also survived byher mother Mary Budzinski, brother Joe Budzinski and his spouse Joy, brother Ted Budzinski and his spouse Cindy, andsister Beverly Hampton and her spouse Willie. Betsy was preceded in death by her father Thaddeus Budzinski. She is also survived by 19 nieces and nephews. Betsy was born in Oil City on August 10th 1960 and graduated from Tyrone High School in 1978. She then studied pharmacy and graduated from the Philadelphia College of Pharmacy and Sciences in 1984. She married Dennis in 1987and their three children were born shortly after. The next 33years flew by in the blink of an eye and were devoted to raising her sons and serving the people of east Lycoming county as a pharmacist. The pride of Betsy’s life was her children and the men that they grew to be. It was rare to make it through a conversation with Betsy without her mentioning her children. A celebration of Betsy’s life will take place at the end of the summer. All are welcome! Arrangements have been entrusted to McCarty~Thomas Funeral Home, Hughesville. Expressions of sympathy may be sent to the family at www.mccartythomas.com.

A good friend of Betsy&#8217;s once told her &#8220;Our time on Earth is borrowed: one&#8217;s impact is measured by if they leave this world a better place.&#8221; There are few that have left an impact as Betsy has. There is no doubt that... View Obituary & Service Information

The family of Elizabeth A. Waddell created this Life Tributes page to make it easy to share your memories.

A good friend of Betsy’s once told her “Our time on Earth is...

Send flowers to the Waddell family.