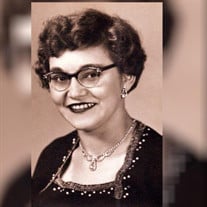 Late in the evening of March 9, 2021 Betty passed away to meet her loving husband in heaven. Elizabeth “Betty” C. Fluck, 85, of Dushore, passed away on Tuesday, March 9, 2021 at Robert Packer Hospital of Sayre. Elizabeth was born April 11, 1935 in Upper Black Eddy, PA, and was the daughter of the late Earl D. Sr. and the late Myrtle E. (Miller) Hoffman. She married Delbert R. Fluck on June 3, 1956 and shared 52 years of marriage. Betty loved quilting for her family and friends. She had several of her quilts entered in the local fairs and the Pennsylvania State Fair in Harrisburg. She has won numerous ribbons over the years. Betty also enjoyed embroidering, traveling, camping with her family, canning, baking, and cooking for her family gatherings. Betty was also a member of St. Paul’s Church of Overton. In her younger days, her and Delbert loved to go square dancing. She is survived by a daughter: Joan E. (Melvin) Rohe of Dushore, and two sons: David N. Fluck, Edward R. (Gale) Fluck both of Monroeton, a sister: Florence Sell of Salford, two grandchildren: Rodney C. (Kendra) Rohe of Muncy Valley, Brian F. (Kimberly) Rohe of Dushore, five great grandchildren: Trinity E. Rohe, Brody R. Rohe, Saylor A. Rohe, Payton E. Rohe, and Harper M. Rohe. She is also survived by many nieces and nephews. In addition to her parents, Betty was predeceased by her foster parents Mamie and Norman Schaffer, her husband Delbert R. Fluck on March 6, 2008, two brothers: Earl D. Hoffman, Jr., and brother, Harry K. Hoffman. A memorial service will be held 11:00 am on Tuesday, March 16 at St. Paul's Church of Overton, 781 Overton Rd., with Pastor Ron Dyer officiating. Burial will follow in the church cemetery. Family and friends will be received from 10-11 a.m. at the church on Tuesday. In Betty’s memory, memorial contributions may be made to St. Paul's Church of Overton 1226 Taylor Hill Rd. Dushore, PA 18614. Arrangements have been entrusted to McCarty~Thomas Funeral Home, Dushore. Expressions of sympathy may be sent to the family at www.mccartythomas.com.

Late in the evening of March 9, 2021 Betty passed away to meet her loving husband in heaven. Elizabeth &#8220;Betty&#8221; C. Fluck, 85, of Dushore, passed away on Tuesday, March 9, 2021 at Robert Packer Hospital of Sayre. Elizabeth was born... View Obituary & Service Information

The family of Elizabeth "Betty" C. Fluck created this Life Tributes page to make it easy to share your memories.

Send flowers to the Fluck family.