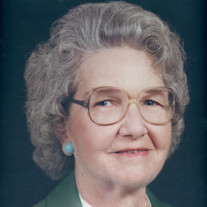 Elizabeth E. “Betty” Applegate, 96, of Hughesville died Wednesday, November 30, 2016 at Skilled Nursing & Rehabilitation Center, Muncy, PA. Betty was the widow of the late Leon A. Applegate who died August 1, 2008. Born June 8, 1920 in Lewisburg, she is the daughter of the late Frederick W. and Lois M. (Brown) Slack. She married her husband Leon A. Applegate on June 14, 1940. Betty was a 1938 graduate of Lewisburg High School, and a 1963 graduate of Bloomsburg University where she received her bachelor's degree in Elementary Education. She taught 2nd grade at Ashkar Elementary for 20 years, and was head teacher there for several years. She was a member of Bethany United Methodist Church, and was secretary of the Sunday School department for many years. Betty was a member of the Rebekah's Organization, and a member of the East Lycoming School Board. She was past president of the Muncy Valley Hospital Auxiliary and was the founder of their Teddy Bear Group in 1988 that meets to this day. Betty served as a board of directors of the Muncy Valley Hospital, and volunteered there for 28 years. She is survived by a daughter, Jeanne M. (Robert) Sinsabaugh of Hughesville; a son, James R. (Diana) Applegate of Hughesville; five grandchildren; six great-grandchildren; and two great-great grandchildren, and two great-great grandchildren on the way. In addition to her husband and parents, she was preceded in death by a daughter, Susan Drabot; a daughter-in-law, Shirley Applegate; a brother, Frederick Slack Jr; and a sister, Martha Peters. Funeral services will be at 2 p.m. on Monday, December 5, at McCarty-Thomas Funeral Home, 557 E. Water Street, Hughesville, with Pastor Jane O’Borski officiating. Burial will be in Pleasant Hill Cemetery, Hughesville. Viewing will be from 1 to 2 p.m. on Monday at the funeral home. Memorial contributions may be made to the Muncy Valley Hospital Auxiliary, C/O Susquehanna Health Foundation, 1001 Grampian Blvd., Williamsport, PA, 17701, or to Bethany United Methodist Church, 113 Second Street, Hughesville, PA 17737. Expressions of sympathy may be sent to the family at www.mccartythomas.com

The family of Mrs. Elizabeth E. "Betty" Applegate created this Life Tributes page to make it easy to share your memories.

Send flowers to the Applegate family.