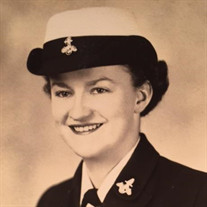 Elaine L. “Maggie” Kline, 83, of Lopez, died Saturday, December 24, 2016, at Celtic Hospice, Wilkes-Barre. Born November 17, 1933 in Jeffersonville, she was a daughter of the late Charles W. and Ida Mae (Geyer) Rogers. She and her husband, Kenneth D. Kline, celebrated 63 years of marriage on June 19, 2016. Maggie was a graduate of Norristown High School, Class of 1951, and served her country honorably in the U.S. Navy. She was a member of Redeemer Church, Dushore, and enjoyed genealogy. Surviving, in addition to her husband, are a daughter, Patricia M. (Robert) McComsey of Oxford; a son, Kenneth D. Kline Jr. of Audubon; and three grandchildren, Christopher (Laura Hricko) Kline, Gillian (Matthew) Layton, and Hilary Kline. In addition to her parents, Maggie was preceded in death by a brother, Charles W. Rogers Jr. and a daughter-in-law, Ruth O. Kline. Funeral services will be held at the convenience of the family. Arrangements have been entrusted to the McCarty-Thomas Funeral Home, Dushore. Expressions of sympathy may be sent to the family at www.mccartythomas.com.

The family of Elaine L. "Maggie" Kline created this Life Tributes page to make it easy to share your memories.

Send flowers to the Kline family.