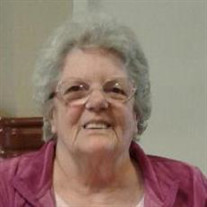 Eileen Lucille Simcox, 81, of Muncy, died Wednesday, December 27, 2017 at Valley View Nursing Center of Montoursville. Eileen was born October 9, 1936 in Meadville. Her husband of 58 years, John J. Simcox, preceded her in death on December 17, 2016. She was a graduate of Sagerstown High School and was employed at the former Carey McFalls, Frito Lay, and Wundies Undies. Eileen enjoyed attending events at the American Legion Post #1, Williamsport, where she was a member of the color guard, and enjoyed shooting pool with friends. She also enjoyed spending time with her grandchildren, and holiday gatherings with family. Surviving are three daughters, Cindy Beaver of Salt Lake City, UT, Debbie L. (Tim) McMillen of Muncy, and Tina (Dawn) Phillips of Williamsport; three sons, David (Terri) Simcox of Hughesville, Randy Sr. (Linda) Simcox of Williamsport, and Patrick Simcox of Hughesville; numerous grandchildren, and great-grandchildren; and a sister Kathy Sedious. In addition to her parents and husband, Eileen was preceded in death by two brothers, James and Clarence Sedious. Funeral services will be held at the convenience of the family. Arrangements have been entrusted to McCarty-Thomas Funeral Home, Hughesville. Expressions of sympathy may be sent to the family at www.mccartythomas.com.

The family of Eileen L. Simcox created this Life Tributes page to make it easy to share your memories.

Send flowers to the Simcox family.