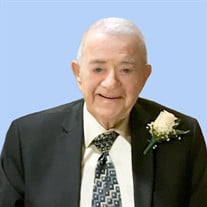 Edward J. Woods, 73, of Elysburg, died Tuesday, March 6, 2018 at Geisinger Medical Center, Danville. Born December 3, 1944 in Rockaway Beach, New York, he was a son of the late Edgar and Catherine (Corkery) Woods. He and his wife, the former JoAnn Hanley, would have celebrated 16 years of marriage on June 28, 2018. Edward was an avid sports fan who especially loved baseball and football, with the Mets and Jets as his favorite teams. He enjoyed fishing, bird watching, building bird houses, and spending time on the beach at the ocean and along the bay area. Edward also enjoyed playing cards and spending time with his family. And for those who knew him, his crazy sense of humor and quick wit will never be forgotten. He was a member of the Knights of Columbus Rockaway Beach Council 2672. Edward was also a former Boy Scout and Cub Scout Leader, and former little league coach. Surviving, in addition to his wife, are three daughters, Jacqueline A. Woods of Elysburg, Nancy A. (Billy) Leonard of West Babylon, NY and Patti A. (Sean) Weldon of Sayville, NY; three sons, Christopher J. Woods of Elysburg, Justin E. Woods of Elysburg, and Edward R. (Paul Chavez) Woods of Atlanta, GA; a sister, Cathy (John) Lieb of Columbus, OH; three brothers, Donald (Lorraine) Woods of Seldon, NY, Kenneth (Tina) Woods of Miller Place, NY and Richard (Martha) Woods of San Diego, CA; and seven grandchildren. In addition to his parents, Edward was preceded in death by his aunt, Elinor Corkery. A Mass of Christian Burial will be held 11 a.m. Monday, March 12, at Church of the Resurrection, 75 Musser Lane, Muncy, with Rev. Glenn McCreary officiating. Burial will be held privately at the convenience of the family. Friends may call from 6 to 8 p.m. Sunday at the McCarty-Thomas Funeral Home, 557 E. Water Street, Hughesville. Expressions of sympathy may be sent to the family at www.mccartythomas.com.

Edward J. Woods, 73, of Elysburg, died Tuesday, March 6, 2018 at Geisinger Medical Center, Danville. Born December 3, 1944 in Rockaway Beach, New York, he was a son of the late Edgar and Catherine (Corkery) Woods. He and his wife, the former... View Obituary & Service Information

The family of Edward J. Woods created this Life Tributes page to make it easy to share your memories.

Send flowers to the Woods family.