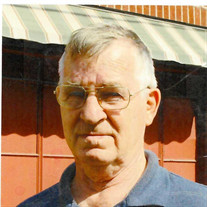 Edward Morton Taylor, 77, of Hughesville, passed away on Tuesday, January 12, 2021 at UPMC Susquehanna Williamsport. Ed was born January 15, 1943 in Muncy and was the son of the late Morton H. and the late Iris (Shaner) Taylor. He married Carolyn B. Smith on June 20, 1964 and shared 56 years of marriage. Ed worked 39 years at Textron of Williamsport as an inspector, retiring in 2003. For over 20 years, he and his wife ran the family dairy farm. For the past 22 years, Ed and his wife operated an antique business in Lewisburg. Edward was honest, hardworking, and had a great sense of humor. He was a handyman that could fix just about anything around the house and on the farm. In high school, he wrestled and played football. Ed was a 2 time runner-up in the NCAA Wrestling Tournament in College. He is survived by his wife: Carolyn B. (Smith) Taylor, two daughters: Michelle A. (Eric) Bohlin of Montoursville, Tracy R. (Mark) Wilson of Hughesville, a son: Brett M. (Toni) Taylor of Hughesville, a sister: Mary Buddendorf of Montoursville, a brother: Keith Taylor of Bloomsburg, 8 grandchildren: Aaron Chilson, Luke Chilson, JaDe Wilson, Amanda O'Donnell, Christopher Bohlin, Alexander Bohlin, Brady Taylor, Brent Taylor and by 7 great grandchildren. In addition to his parents, Ed is predeceased by a son, Drew E. Taylor on February 15, 2012 and by a sister, Helen Epstein. Friends may call on Tuesday, January 19, 2021, from 9:30 am – 11:30 am at McCarty~Thomas Funeral Home 557 E. Water St. Hughesville. Family and friends are invited to attend 12 noon graveside service at Picture Rocks Cemetery with Pastor Doug W. Mellott officiating. In Ed’s memory, memorial contributions may be made to the American Cancer Society 1948 E. 3rd. Street Williamsport, PA 17701, in honor of his son. Expressions of sympathy may be sent to the family at www.mccartythomas.com.

Edward Morton Taylor, 77, of Hughesville, passed away on Tuesday, January 12, 2021 at UPMC Susquehanna Williamsport. Ed was born January 15, 1943 in Muncy and was the son of the late Morton H. and the late Iris (Shaner) Taylor. He married Carolyn... View Obituary & Service Information

The family of Edward Morton Taylor created this Life Tributes page to make it easy to share your memories.

Edward Morton Taylor, 77, of Hughesville, passed away on Tuesday,...