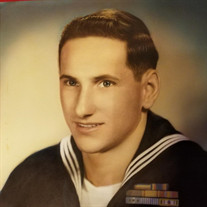 Earl E. Burkhart (Burky), 86, of Hughesville, passed away on Wednesday, July 17, 2019, at the Skilled Nursing & Rehabilitation Unit of Muncy. He was the husband of Joann B. Reed Burkhart with whom he married on Oct. 1, 1965, and shared 53 years of marriage. He was born in Williamsport on Tuesday, March 28, 1933, and was the son of the late Earl R. and Lulu M. Schick Burkhart. Earl was a U.S. Navy veteran who served his country during the Korean War. He later went on to work for over 30 years at Bethlehem Steel. He then retired in 1995 from Williamsport Wire and Rope. He also enjoyed going to his grandsons' sporting events and working around the house and yard. He was a life member and past commander of Glen Sharrow Post 35 American Legion in Hughesville, life member of VFW Post 3428 in Muncy, Muncy Valley PA Lodge 866 Loyal Order of Moose, Muncy Lodge 299 Fraternal Order of Moose, Valley of Williamsport Consistory and Highland Lake Manor. He is survived by his wife, Joann, a son, Shawn D. Burkhart, of Milton; a daughter, Tracey E. Coleman, of Hughesville; a brother, Donald G. Burkhart, of Hughesville; and three grandsons, Zackary Burkhart, Lucas Burkhart, and Chad Coleman. In addition to his parents, Earl was preceded in death by a brother, Harold Burkhart. Funeral services will be held 11 a.m. Saturday, July 27, at McCarty~Thomas Funeral Home, 557 E. Water St., Hughesville, with Rev. James A. Savage officiating. Burial will be private. Friends may call from 10 to 11 a.m., on Saturday at the funeral home. In Earl's memory, contributions may be made to Lycoming County Protection Society, 195 Phillips Park Drive, Williamsport, PA 17701. Expressions of sympathy may be sent to the family at www.mccartythomas.com.

Earl E. Burkhart (Burky), 86, of Hughesville, passed away on Wednesday, July 17, 2019, at the Skilled Nursing & Rehabilitation Unit of Muncy. He was the husband of Joann B. Reed Burkhart with whom he married on Oct. 1, 1965, and shared 53 years... View Obituary & Service Information

The family of Earl E. Burkhart created this Life Tributes page to make it easy to share your memories.

Send flowers to the Burkhart family.