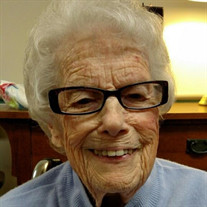 Dorothy E. Myers, 102, formerly of Lairdsville, died Saturday, March 16, 2019 at Skilled Nursing & Rehabilitation Center, Muncy. Born January 21, 1917 in Lairdsville, she was a daughter of the late Alvin H. and Nellie A. (Poust) Houseknecht. Her husband of nearly 53 years, James R. Myers, preceded her in death on December 28, 1995. Dorothy was employed at the former Glenn L. Martin in Baltimore, Maryland, where she assembled airplane parts during WWII. In 1944, Dorothy moved to Monroe, Louisiana to be with her husband Jim who was stationed there with the U.S. Army Air Corps. Jim was discharged in 1945 and they returned home to Lairdsville where they owned and operated Myers’ Texaco for over 20 years. Dorothy could often be seen pumping gas and checking oil for her customers. Dorothy is survived by nieces and nephews, who enjoyed her homemade pies, cookies, and rice pudding. In addition to her parents and husband, Dorothy was preceded in death by a sister, Celia Myers, and a brother, Russell Houseknecht Sr. Funeral services will be held 11 a.m. Tuesday, March 19, at McCarty-Thomas Funeral Home, 557 E. Water Street, Hughesville, with Pastor Paul Shaner officiating. Burial will follow in Pleasant Hill Cemetery, Hughesville. Friends may call from 10 to 11 a.m. Tuesday at the funeral home. The family will provide the flowers and suggest memorial contributions to St. Mark's Church of Lairdsville, 6456 Rt. 118 Hwy., Lairdsville, PA 17742 or the Lairdsville Community Vol. Fire Comp., 143 School Lane, Lairdsville PA 17742. Expressions of sympathy may be sent to the family at www.mccartythomas.com.

The family of Dorothy E. Myers created this Life Tributes page to make it easy to share your memories.