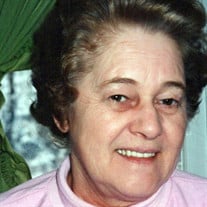 Doris Evelyn “Dot” Rider, 92, of Eagles Mere, passed away at The Gatehouse on the evening of January 23, 2021. Dot was born February 18, 1928. She was the daughter of Agnes Fritz Little and Jason “Scoop” Little and was raised in the Nordmont area. She attended school in Sullivan County and worked many places including the Crestmont, Sylvania and the Highlands Care Center. She married George Rider in 1945 and celebrated 66 years of marriage before his passing in 2011. Motherhood, and especially babies, were her passion and she treasured her grandchildren and great grandchildren, relishing every moment she spent with them. Dot also loved to cook and bake and had the gift of hospitality, always welcoming visitors to meals and making sweet treats for her family. She was a very loyal lady always ready to take care of any needs that her family or friends had. She is survived by two sons, Robert Rider and William (Patty) Rider both of Eagles Mere; a sister, Eleanor Shaheen of Hughesville; two granddaughters, Stephanie (Kevin) Botsford of Laporte and Jennifer (Tony) Zelewicz of Eagles Mere; and seven great grandchildren, Jacob Botsford, Adelyn Zelewicz, Grace Zelewicz, Isaiah Botsford, Luca Zelewicz, Jesse Botsford and Kian Botsford. In addition to her husband, Dot was preceded in death by a son, Larry Rider; two brothers, Kenny and Mervin Little; and two sisters, Beulah Stackhouse and Elizabeth “Libby” Poust. A memorial service is being planned for a later date. Arrangements have been entrusted to McCarty-Thomas Funeral Home, Hughesville. Expressions of sympathy may be sent to the family at www.mccartythomas.com.

The family of Doris E. "Dot" Rider created this Life Tributes page to make it easy to share your memories.

Send flowers to the Rider family.