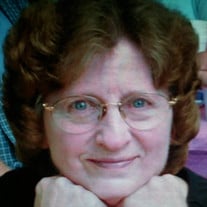 Donna L. Hall, 77, of Muncy, died Sunday, February 28, 2021 surrounded by her loving family. Born March 29, 1943 in Ontario, N.Y., she was a daughter of the late Kenneth L. Deppen and the late Vida Mae (Bull) Lima. Her husband of 57 years, Eugene W. Hall, preceded her in death on April 5, 2017. Donna and her husband Gene owned and operated Everbe Farm in Penn Township as a dairy farm for over 47 years, then as a crop farm until her death. Family, friends, and farm life were so important in her life here on earth. Donna was the founding member of Farm Women United and worked tiressly as an advocate for family owned dairy farms on a state and local level. She also supported several Christian organizations and in her free time Donna enjoyed artwork and spending time with her family. Surviving is a daughter, Kimberly A. (Hank) Sharrow of Philippi, W.VA.; a son, Christopher J. (Cindy) Hall of Muncy Valley; eight grandchildren; 20 great-grandchildren; and nine brothers and sisters. In addition to her parents and husband, Donna was preceded in death by a son, Byron E. Hall. Funeral services will be held 11 a.m. Monday, March 8, at The Beacon: A United Methodist Church, 148 S. Main St., Hughesville, with her son-in-law, Pastor Hank Sharrow, officiating. Burial will follow in Mt. Zion Cemetery, Hughesville. Friends may call from 10 to 11 a.m. Monday at the church. Arrangements have been entrusted to McCarty-Thomas Funeral Home, Hughesville. Expressions of sympathy may be sent to the family at www.mccartythomas.com.

The family of Donna L. Hall created this Life Tributes page to make it easy to share your memories.

Send flowers to the Hall family.