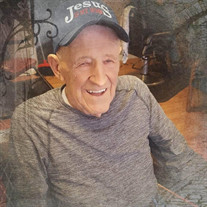 Dio M Vandine, 87, of Montoursville, passed away on Friday, June 18, 2021, at his home. Dio was born July 14, 1933, in Muncy, and was the son of the late Bruce L. and the late Ocie (Wagner) Vandine. He married Jane L. Ellis on February 7, 1953 and shared 68 years of marriage. Dio served his country honorably in the U.S. Army during Korean War. At the young age of 19, Dio worked with furniture as an Upholster. In 1960, Dio started his own business Vandine Upholstering and retired from his business in 2010. Dio also worked for many years at Schnadig Corp. and the Faus Furniture and Carpeting. He was an avid hunter who enjoyed going out to eat with his wife. He also enjoyed bowling and camping with the family. He is survived by his wife; Jane L. (Ellis) Vandine, two daughters; Teresa A. Hall of Hughesville, Linda M. (Anthony) Keiser of Muncy, three sisters; Phyllis Weikel of Montoursville, Norma Charles of Hughesville, Janet Shannon of Montoursville, a brother; Ronnie Vandine of Northumberland, three grandchildren; Christopher Hall, Nicholas Pearson, Joseph Pearson, seven great Grandchildren; Bryan Thomas, Mara Pearson, Brock Pearson, Noland Pearson, Declan Pearson, Cael Pearson and Bryan Hall In addition to his parents, Dio is predeceased by a sister, Shirley Foust and by a brother, Lester Vandine. Funeral services will be held 11:00 am on Friday, June 25 at Hughesville Friends Church, 137 South Third Street, Hughesville, with Rev. Dan Cale officiating. Burial will follow in Muncy Cemetery. Family and friends may call from 9-11 a.m. on Friday, at the church. In Dio’s memory, memorial contributions may be made to Hughesville Friends Church. Arrangements have been entrusted to McCarty~Thomas Funeral Home, Hughesville. Expressions of sympathy may be sent to the family at www.mccartythomas.com.

The family of Dio M. Vandine created this Life Tributes page to make it easy to share your memories.

Dio M Vandine, 87, of Montoursville, passed away on Friday, June...

Send flowers to the Vandine family.