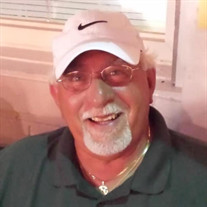 Dennis Gene Simons, 74, Montoursville, passed away on Friday, December 18, 2020 at UPMC Williamsport. Denny was born July 31, 1946 in Williamsport and was the son of the late Alvin D. and Anna L. (Smith) Simons. Denny married Deb Schneider on September 27, 2008 and shared 12 wonderful years of marriage. Denny graduated from Hughesville High School (East Lycoming School District), class of 1964, where he participated in wrestling and football. Denny was fortunate to have such wonderful classmates that became long lasting friends. He attended Williamsport Area Community College. He is a U.S. Army veteran. Denny retired from CSX Transportation in 2007 after 30 years as a Railroad Engineer. He also served as Union Local Chairman for the Brotherhood of Local Engineers throughout his career. He truly loved helping his fellow railroaders get the help they needed to do a great job. The stories he had were a great part of him. His family and friends loved to hear him tell them. He resided in Chillicothe, OH, and Wilmington, DE during those years. Denny served as a Lycoming County Fair Association director from 2009 to 2017. He was the Concession Agent like his father Alvin from 2011-2015. Denny’s mother Anna and Alvin were a part of the fair family and so was Denny. The fair was such a wonderful time for us and we enjoyed talking to all the vendors and I could see how much they loved Denny. In 2017 he became an honorary director because of his health. Denny was an avid fisherman, spending week-long vacations for many years at World’s End, Forksville, PA. His railroad friends often joined him at the cabin to enjoy the sport. He loved getting the cabin for the week and his mother would make pickled eggs and cook a ham for them to enjoy. Later when the guys couldn't get together Denny, John and I would go and he shared that with us. Denny, Deb and John loved the ocean and the beach, repeatedly vacationing at Rehoboth Beach, DE. We also went to Paradise Village in Puerto Vallarta, Mexico several wonderful times with my parents Carol and Harry Schneider. Family dogs Sadie and Abby were important members of Denny’s world, keeping him company and watching over him through his healthy years and during times of challenging health issues. He dearly loved them and at times he was surprised how much love and attention those furry girls gave him. We can’t forget Pookey our cat. Denny wanted to bring him in out of the cold 8 years ago and he has been the best cat. The girls attack him but he can hold his own. We always said welcome to the circus. He is survived by his wife: Deb Simons, his son: John H. Schneider of Montoursville and his sister: Ann Marie States of Hughesville. Funeral services will be private and held when it is deck weather per Denny. In Dennis’s memory, memorial contributions may be made to North Central Sight Services 2121 Reach Road. Williamsport, PA 17701 or SPCA 2805 Reach Road Williamsport, PA 17701. Arrangements have been entrusted to McCarty~Thomas Funeral Home, Hughesville. Expressions of sympathy may be sent to the family at www.mccartythomas.com.

The family of Dennis Gene Simons created this Life Tributes page to make it easy to share your memories.

Send flowers to the Simons family.