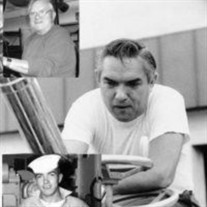 Dennis W. Jordan, 82, of Eagles Mere (previously of Conshohocken) passed away January 27, 2021 at Muncy Place Senior Communities. He was born September 26, 1938 in Shrewsbury Township, Sullivan County, a son to the late Walter and Geraldine (Golder) Jordan. Dennis married the late Carol Andrews at Eagles Mere Community Church, November 14, 1959. They were married 55 years at the time of Carol’s death. Dennis served in the U.S. Navy where he earned his GED and learned his trade as a Metal Smith that he used throughout his life. In 2004, he retired as utility worker, though mostly remembered as a sheet metal fabricator, from Hale Fire Pump Company after more than 32 years of service. He was a lifelong learner and motivated to keep busy. He learned various computer programs and even some programing language, completed a welding course at 58 and was certified and recertified in various fire safety courses well into his 70’s. Whether it was making something for himself or someone else, especially if it was fabricated from metal, he usually had something going on. In the late 1980’s he along with his brother-in-law’s built his then vacation home and eventually his and Carol’s retirement home in Eagles Mere. Dennis was very proud as an employee and retiree of Hale but also extremely proud as a member of Spring Mill Fire Company #1. He served as an active member for 59 years, holding numerous positions including Fire Chief and Board Member. Spring Mill Fire Company #1 paid a very nice tribute to him on their Facebook page. Dennis answered to a variety of names; Dennis or Denny to some, Butch to family, Uncle Dennis to cousins, “Yonuts” to co-workers, Dad and Pop-Pop. He will be remembered as a kind, caring and gentle soul who loved snacks (cookies, ice cream and the ever present WHOPPERS malted milk balls), banquets, socializing and dancing. Dennis was predeceased not only by his wife Carol, father Walter, mother Geraldine Heeman, but his step father Clifford Heeman, sisters Geraldine and Shirley Jordan, brothers Gary Heeman, Leonard and Clarence Jordan and son-in-law Joseph Fazio. Dennis is survived by daughters, Lorraine Fazio and Deborah (David) Miller; granddaughters, Heather Thompson, Brandy (Lee) Miletich, Sarah (Todd) Stevens, Katie and Emily Miller; great grandchildren, Quinn and Brody Stevens and Lee Miletich Jr.; brothers, Russell Jordan, Toby Jordan, Dale Heeman, Cliff (Heeman) Henry, Ron Heeman and Charles Heeman; sisters, Kitty Rose, Dixie Goodell, Pat Rhodes, Linda Meeker, Debbie Horner and Edith Hadlock. He is also survived by in-laws Elaine Richlin, Robert Andrews and Donald (Linda) Andrews, as well as, many nieces, nephews and cousins. A memorial service is being planned around his birthday in September. Arrangements have been entrusted to McCarty~Thomas Funeral Home, Hughesville. Expressions of sympathy may be sent to the family at www.mccartythomas.com.

The family of Dennis W. Jordan created this Life Tributes page to make it easy to share your memories.

Send flowers to the Jordan family.