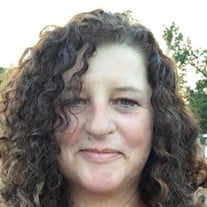 Deneen I. “Dee” Fluck, 53, of Forksville, died Monday, June 18, 2018 at her home. Born January 27, 1965 in Lansdale, she was a daughter of the late Donald P. and Doris J. (Ressler) Covelens. She and her husband, H. Craig Fluck, celebrated 17 years of marriage on May 11, 2018. Dee was a graduate of Central Bucks West, Doylestown, Class of 1983. She was currently employed as a CNA at Darway Elder Care and previously drove school bus for the Sullivan County School District. Dee was a member of the Forksville United Methodist Church, the Sullivan County Fair where she served on the entertainment committee, and the Sullivan County Dairy Promotion serving as booking chair. The outdoors held a special place in Dee’s heart. She enjoyed fishing, camping, floating on the river, and above all, spending time with her family. Surviving, in addition to her husband, are two daughters, Katie M. (Robb Chilson) Fluck of Towanda, and Elizabeth J. Fluck of Forksville; two sons, Thomas J. (Charity) White of Dushore, and Travis F. (Crystal) White of Wysox; a step-daughter, Corey L. (Jon) Stead of Muncy Valley; a step-son, Craig J. Fluck of Clearfield; four sisters, Deb Lindenmuth of Lancaster, Diane (Paul) Petrun of Warminster, Dawn (Craig) Cornell of Warminster, and Donna (Jim) Carden of Chalfont; a brother, David P. (Kelly) Covelens of Greendale, WI; and 12 grandchildren. In addition to her parents, Dee was preceded in death by a brother, Donald Covelens. A memorial service will be held 12 p.m. Sunday, June 24, at McCarty-Thomas Funeral Home, 119 Carpenter Street, Dushore, with Pastor Jacob C. Lund officiating. Burial will be held privately at the convenience of the family. Friends may call from 11 a.m. to 12 p.m. at the funeral home. The family will provide the flowers and suggest memorial contributions to the Pat McCarty Memorial Benefit Fund, 5048 PA-87, Forksville, PA 18616. Expressions of sympathy may be sent to the family at www.mccartythomas.com.

The family of Deneen I. "Dee" Fluck created this Life Tributes page to make it easy to share your memories.

Send flowers to the Fluck family.