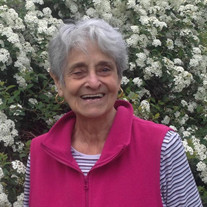 Delia Diaz, 91, of Montoursville, passed away peacefully at home May 23, 2020, listening to her favorite music. She was born November 21, 1928, in Alquizar, Cuba, the youngest of four children of Francisco and Antolina Gonzalez. Delia is one of most gracious, compassionate, and generous individual you will ever come to know. She always offers nothing short of a warm smile and kind comment to all upon meeting them. Delia grew up on a family farm where she took an active role maintaining the farm. She often reminisced of riding her horse throughout the farm and walking the long road, lined with coconut trees, leading to her home. Delia was courted by her husband, Francisco Diaz for eight years before they married Aug. 31, 1957. They were happily married for 56 years until Francisco passed January 31, 2015. They had two sons, 10 grandchildren, and two great-grandchildren. On Nov. 22, 1966, the family immigrated to the United States, living in Newark, N.J. She worked as a seamstress for 20 years. Delia enjoyed her employment but mostly treasured the individuals she worked with, for whom she held fond memories. Delia enjoyed spending time on the family farm and vacationing on the beautiful beaches of Cuba. In later years, spending time on the beaches of south Florida with their sons and grandchildren were the moments she lived for. Unlike her husband who was a New York Mets fan, she rooted for the Yankees. After moving to Montoursville, Delia became an avid Penn State football fanatic and would view most, if not all of the games on television. Delia watched the games intently in an attempt to catch her son in the stands during the home games. In retirement she enjoyed spending time with her sons but most of all, time with her grandchildren. Delia was also a professional (tongue in cheek) domino player and was very humble while winning, especially when she dominated while playing her favorite game. Delia enjoyed her son’s pop warner, high school and college football games. She treasured the thousands of pictures taken of family reunions; vacations; sports events, and time spend with her husband. Delia spent hours on end looking at pictures of her family and friends. She proudly shared her memories with anyone and everyone who was willing to sit with her to view her photos. She was preceded in death by her husband, Francisco, sister, Paquita, and brother, Horacio. Delia is survived by her son, Al (Marty) Diaz of Montoursville, and their children, Katie (Jake) Haines and AJ; son Luis (Margaret) Diaz and their children Valen (Joe) Grandelski, Kellen, Deven, Brennen, Owen, Camren, Jaden, and Taren of Connecticut, great-grandchildren, Oliver and Elias Grandelski, and sister, Delfina. Services will be held privately at the convenience of the family. In lieu of flowers, family suggests memorial contributions be made to Susquehanna Home Care and Hospice or a charity of choice. Arrangements have been entrusted to McCarty~Thomas Funeral Home, Hughesville. Expressions of sympathy maybe sent to the family at www.mccartythomas.com.

Delia Diaz, 91, of Montoursville, passed away peacefully at home May 23, 2020, listening to her favorite music. She was born November 21, 1928, in Alquizar, Cuba, the youngest of four children of Francisco and Antolina Gonzalez. Delia is... View Obituary & Service Information

The family of Delia Diaz created this Life Tributes page to make it easy to share your memories.

Delia Diaz, 91, of Montoursville, passed away peacefully at home...

Send flowers to the Diaz family.