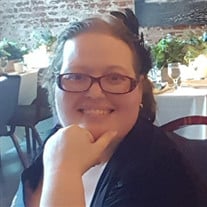 Deena J. Cooper a resident of Muncy, died peacefully on Saturday, December 16, 2017, with her husband by her side. Born September 10, 1977, in Danville, she was the daughter of the late D. Blaine Cooper and his beloved wife Diana (Yavorski). On July 4, 2015 Deena was joined in love with Christopher Hrapowicki. Deena graduated from Warrior Run High School in 1996 where she was an inspiring artist and graphic designer. She attended Pennsylvania College of Technology, graduating with a bachelor’s in Graphic Design in 2001. She enjoyed designing many different projects and was employed by Keystone Advertising. Deena was an all-star cheerleading coach. She was the co-founder of the Williamsport Twisters. During her time as a coach, she helped her teams win numerous local, state and national titles. She was a tough coach who loved everyone in her program immensely. Her motto to the teams was, “FOCUS ON THE TASK AT HAND!” She spent her extra time with her sister coaching and enjoying family time at Lake Mokoma. She would also spend time with her “Toots”, Hailey (her god daughter and niece) and her “Tut”, Toren (her nephew). She is survived by her husband Christopher Hrapowicki; his daughters, Emily Bieber and Tracy Sessoms; her mother, Diana Y. Cooper; her sister (also known as “Her Person”), Stacy E. Ferraro; her brother B. Christopher Cooper and wife Kelley; and Hailey and Toren Cooper niece and nephew. Also surviving are Julia and David Howell, aunt and uncle; cousins, Amy and husband PJ Harte (Nora and Sullivan), cousins Daniel and Jamie Howell (Emma, Beckett and Griffin), Susan D. Mabus and Albert Mabus, aunt and uncle, cousins Lance and Melissa Mabus (Lincoln) and cousin Erika Mabus. Also, her Aunt Donna (cousins Cherissa and Ariyana), and Aunt Kitty (with numerous adoring cousins). Family was important to her, as were many friends that were like family including Chad and Jason, Michelle and Brent (and “Hammy”), and Michelle and John (Madison and Jesse). She was preceded in death by her father, D. Blaine Cooper last May. Funeral services will be held 11 a.m. Friday, December 22, at McCarty-Thomas Funeral Home, 557 E. Water St., Hughesville. Burial will follow in Mountain Ash Cemetery, Laporte. Friends may call from 7 to 9 p.m. Thursday at the funeral home. In lieu of flowers the family asks that donations be made to McCarty-Thomas Funeral Home to help defray the funeral costs. Also, the family would like to thank everyone who supported Deena during her fight, especially those who were generous. Donations could also be made to the Kick Cancer 5K/ Country Store Venison Processing, which benefits local people fighting cancer. 607 Village Road, Pennsdale, PA 17756. Expressions of sympathy may be sent to the family at www.mccartythomas.com.

Deena J. Cooper a resident of Muncy, died peacefully on Saturday, December 16, 2017, with her husband by her side. Born September 10, 1977, in Danville, she was the daughter of the late D. Blaine Cooper and his beloved wife Diana (Yavorski).... View Obituary & Service Information

The family of Deena J. Cooper created this Life Tributes page to make it easy to share your memories.

Send flowers to the Cooper family.