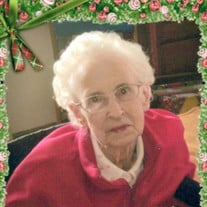 Deanie E. Rhone, 97, of Watsontown formerly of Montgomery, passed away on Sunday, December 6, 2020 at Watsontown Nursing & Rehab Center. Deanie was born September 15, 1923 in Washington Twp. She is the daughter of the late Benjamin Harrison and the late Pearl Catherine (Buss) Tilburg. In 1943, Deanie fell in love with Austin, Texas when she followed her soldier husband there. Traveling solo by train, she experienced the beauty of the Texas Bluebonnets and they became her favorite flower. Deanie’s life had many struggles but she managed to raise four kids while working a hard factory job at Montgomery Mills. After her job was eliminated, Deanie became Nana for her grandchildren Lori and Jeff. All her grandchildren knew her love for peanut butter cups and Sprite. Price is Right, Wheel of Fortune and Jeopardy were on her schedule every day after reading her newspaper. She loved her independence and the freedom of her car and driver’s license. For many years, Deanie wrote a daily diary to record all the important events in her family’s lives. Later in life, she also wrote short stories to record highlights of her own life, like her trip to Austin, Texas. She had excellent math skills, adding up a row of numbers faster than most people can put them in a calculator. She was a task person and loved making lists. Most of all she loved her family and her family treasured every year of her life. She is survived by two daughters: Diane F. (Jan) Rhone of Osceola, IN, Sharon K. (Ronald) Miller of Montgomery, a son: William S. (Marcia) Rhone of Montgomery, 12 grandchildren, 22 great-grandchildren and 7 great great-grandchildren. Deanie was predeceased by a son, Wayne E. Rhone, two sisters; Elizabeth Morehart, Grace Crain, and by 2 brothers; John and Benjamin Tilburg, Jr. Also treasuring Deanie’s memory is Cindy Frey, Deanie’s caregiver and helper for the last five years. The family would like to acknowledge all the staff at Watsontown Nursing and Rehab Center and thank them for their compassionate care. Due to COVED – 19, Deanie’s funeral services will be private and held at the convenience of the family at the Elimsport Cemetery of Allenwood with Pastor Michael A. Hill officiating. In Deanie’s memory, memorial contributions may be made to St. John's United Methodist Church, c/o G. Burrows Treas. 372 Cooley Rd. Allenwood, PA 17810 Funeral arrangements have been entrusted to McCarty~Thomas Funeral Home, Hughesville. Expressions of sympathy may be sent to the family at www.mccartythomas.com.

Deanie E. Rhone, 97, of Watsontown formerly of Montgomery, passed away on Sunday, December 6, 2020 at Watsontown Nursing & Rehab Center. Deanie was born September 15, 1923 in Washington Twp. She is the daughter of the late Benjamin Harrison... View Obituary & Service Information

The family of Deanie E. Rhone created this Life Tributes page to make it easy to share your memories.

Send flowers to the Rhone family.