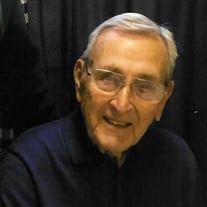 David G. Painter, 94, of Hughesville, passed away on Wednesday, July 14, 2021, at UPMC Williamsport. David was born June 30, 1927, in Orbisonia, and is the son the late Joseph H. and the late Virginia (Morrow) Painter. David married Donna J. Nelson on December 22, 1982, and shared 38 years of marriage. David served his country honorably from 1944 – 1945 as volunteer for the U.S. Maritime Service and Merchant Marine during WW II, U.S. Army Air Corps from 1946–1949 and from 1952 – 1956 in the U.S. Air Force during the Korean War. After 35 years as an Air Traffic Controller, he retired from the FAA in 1983. David was also a member of the Muncy lodge #299 F.&A.M. He is survived by his wife; Donna J. (Nelson) Painter, a daughter; Glenda D. (Charles) Farrington of Montoursville, a stepson; Jeffrey R. (Sharon) Schwartz of Tyler, TX, a granddaughter; Marcey Snyder of Bloomsburg, two grandsons; Douglas Farrington of Wellsboro, David Farrington of Sanford, FL, step granddaughter; Melissa Grimes of Tyler, TX, step grandson; Eric Schwartz of Whitehouse, TX, 10 great grandchildren and 2 great great-grandchildren. David was predeceased by his first wife, Gladys P. (Rogers) Painter on October 6, 1981, two brothers, two sisters, and by a stepson; Don E. Schwartz. A memorial service will be held 11:30 a.m. on Wednesday, July 21 at Community Baptist Church, 1853 State Route 87, Montoursville, with Elders James Larkin and Chris Santalucia officiating. Burial will be private. Friends may call from 10:30-11:30 a.m. at the church on Wednesday. In David’s memory, the family request that memorial contributions be made to the charity of your choice. Arrangements have been entrusted to McCarty~Thomas Funeral Home, Hughesville. Expressions of sympathy may be sent to the family at www.mccartythomas.com.

The family of David G. Painter created this Life Tributes page to make it easy to share your memories.

David G. Painter, 94, of Hughesville, passed away on Wednesday,...

Send flowers to the Painter family.