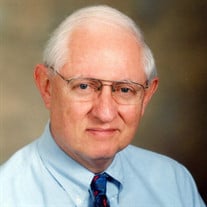 David M. Heiney, 80, of Hughesville, passed away Sunday, December 20, 2020 at UPMC Susquehanna, Williamsport. Born August 28, 1940 in Williamsport, he was a son of the late Wilbur L. and Elizabeth H. (Stryker) Heiney. He and his wife, the former Donna M. Michael, celebrated 57 years of marriage on July 6, 2020. Dave was a graduate of Williamsport High School, Class of 1958. Following graduation, he would continue his education at Lycoming College where he received his Bachelor’s degree in 1962, followed by his Master’s degree from Bucknell University in 1966, and his Doctor of Education from NOVA Southeastern University in 1977. Dave began his career as a Diagnostic Assistant at the former Williamsport Area Community College in 1963. A year later he would take a position with the University of Delaware before moving on to the Delaware County Community College where he served as Director of Counseling and Director of Admissions. In 1976 Dave returned home to serve as Dean of Students and Career Development for the former Williamsport Area Community College and later as their Interim President. In 1983 Dave left the former Williamsport Area Community College and was employed as Director of Education and Employee Relations for Williamsport Hospital before retiring in 2004 from Lycoming College where he served as Director of Administrative Services. A sports enthusiast his entire life, Dave loved nothing more than to find himself in the bleachers or propped up along a fence cheering on his six grandchildren year-round. He was a former member of Hughesville Rotary, East Lycoming Board of Education, and a former Pennsylvania Special Education Mediator. Dave currently served on the Lycoming County Authority and secretary of the Advisory Counsel for STEP office of Aging. He was also a member of The Beacon: A United Methodist Church, Hughesville. Surviving, in addition to his wife, are a son, Matthew L. (Leslie) Heiney of Muncy; a daughter, Lisa M. (Cherif) Ammar-Khodja of Muncy; and six grandchildren, Valerie Z. Ammar-Khodja, Kenna J. Ammar-Khodja, Sadia A. Ammar-Khodja, Cassandra M. Heiney, Joshua L. Heiney, and Jonah M. Heiney. A private graveside funeral service will be held in Montoursville Cemetery at the convenience of the family. The family will provide the flowers and suggest memorial contributions to the Hughesville Public Library, 146 S. Fifth St., Hughesville, PA 17737 or the Son Light House, 130 Carpenter St., Muncy, PA 17756. Arrangements have been entrusted to McCarty-Thomas Funeral Home, Hughesville. Expressions of sympathy may be sent to the family at www.mccartythomas.com.

David M. Heiney, 80, of Hughesville, passed away Sunday, December 20, 2020 at UPMC Susquehanna, Williamsport. Born August 28, 1940 in Williamsport, he was a son of the late Wilbur L. and Elizabeth H. (Stryker) Heiney. He and his wife, the... View Obituary & Service Information

The family of David M. Heiney created this Life Tributes page to make it easy to share your memories.

Send flowers to the Heiney family.