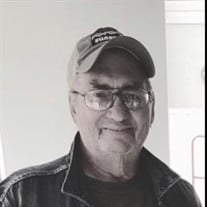 David M. Ault, 72, of Muncy, passed away on Tuesday, July 16, 2019, at his home. He was the husband of Donna J. Feigles Ault with whom he married on May 22, 1965 and shared 54 years of marriage. David was born in Williamsport, on Wednesday, March 19, 1947, and was the son of the late Robert M. and Carolyn E. Zarr Ault. David worked as a production scheduler for over 25 years at Sprout Waldron. He then went on to retire after working for 13 years at Muncy Homes in 2008. David, also known as the Elvis of Muncy, enjoyed sitting on his porch and listening to music, family gatherings, riding his four-wheeler, singing Elvis, and he and Butch's frequent visits with friends at the Muncy VFW and the Muncy Moose. He is survived by his wife, Donna, three daughters, Crystal L. (Paul) Chamberlain, of Muncy, Faith A. (Jack III) Stewart, of Muncy, and Nikki R. (Jerry) Stepp, of Muncy; a sister, Margaret L. Boyles, of Williamsport; three granddaughters and four grandsons, Lindsey (Mike) Eck, Alicia Chamberlain, Jack Stewart IV, Matthew Stewart, Anthony David Stepp, Katie (Cameron) Arthur, and Tyler Stepp; four great-grandchildren, Blake, Peyton, Jackson, and Addisyn; a lifelong best friend of 64 years, Butch T. (Peach) Brittain, of Muncy; and by the family four-legged friend âSugar.ã In addition to his parents, David is predeceased by an infant daughter, Deanna Ault, and by a sister, Victoria E. Ault. Funeral services will be held 11 a.m. Saturday, July 20, at McCarty~Thomas Funeral Home, 557 E. Water St., Hughesville, with Rev. James A. Savage officiating. Burial will follow in Muncy Cemetery. Friends may call from 10 to 11 a.m. Saturday at the funeral home. In David's memory, contributions may be made to the American Cancer Society, 1948 E. Third St., Williamsport, PA 17701, or to the SPCA, 2805 Reach Road, Williamsport, PA 17701. Expressions of sympathy may be sent to the family at www.mccartythomas.com.

David M. Ault, 72, of Muncy, passed away on Tuesday, July 16, 2019, at his home. He was the husband of Donna J. Feigles Ault with whom he married on May 22, 1965 and shared 54 years of marriage. David was born in Williamsport, on Wednesday,... View Obituary & Service Information

The family of David M. Ault created this Life Tributes page to make it easy to share your memories.

Send flowers to the Ault family.