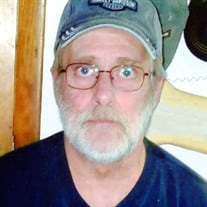 Danie Lee McMillen With sad hearts we announce Danie’s passing with family by his side on Friday, January 12, 2018. He had fought a courageous battle with cancer for 2 years. Born February 10, 1958, he is the son of Loretta J. (Obst) Gawblick, of Muncy, and the late William McMillen. On December 23, 1994 he married his wife Curta (Confer) McMillen and celebrated their 23rd wedding anniversary this past December. Due to his illness, Danie had to retire early but prior to that he was a welder by trade with his brother Tim by his side. Both being welders, outside of work they made beautiful yard art together, many of which are displayed in family yards. He enjoyed riding Harley Davidson motorcycles and 4 Wheelers, going to flea markets and yard sales. But, mostly Danie enjoyed and loved dearly his family and four-legged children, Max, Dude, and Journey. Surviving in addition to his wife and mother, is a son, Thomas E. DelJanovan of Huntingdon; four sisters: Carol (Dave) Pittinger of Montoursville, Stephanie Sisley of OH, Donna (Dave) Mowery of Montoursville, Diane (Dave) Ellerman of WI; two brothers, Tim (Debbie) McMillen of Muncy, Robert (Judy) McMillen of FL; special nieces, Jennifer, Beth, Melissa, Charlotte, and Natasha; special nephews, Jason, Jeremy, and John; his mother-in-law, Donna Confer; 2 brother-in-law’s, Frank Confer, and Robert (Chris) Confer; and numerous cousins, great nieces and nephews. In addition to his father, he was preceded in death by two sons, Joshua James McMillen, and Danie L. McMillen, Jr.; a daughter, Nichole; a sister Karen McMillen; and his father-in-law, Robert Confer. In keeping with Danie’s wishes, a private gathering will be held at the convenience of the family. Burial will be in Twin Hills Memorial Park, Muncy. Arrangements are entrusted to McCarty-Thomas Funeral Home, Hughesville. Expressions of sympathy may be sent to the family at www.mccartythomas.com

Danie Lee McMillen With sad hearts we announce Danie&#8217;s passing with family by his side on Friday, January 12, 2018. He had fought a courageous battle with cancer for 2 years. Born February 10, 1958, he is the son of Loretta J. (Obst)... View Obituary & Service Information

The family of Danie Lee McMillen created this Life Tributes page to make it easy to share your memories.

Send flowers to the McMillen family.