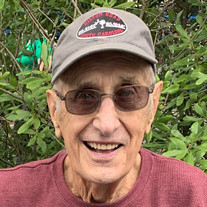 Clarence (Toots) Larue Barto, 94 of Hughesville, passed away Friday, Nov. 5. Born April 22, 1927, he was the son of the late Jacob and Hazel (Reese) Barto. Toots worked for Henry Buck in the ‘50s before becoming employed by Anton Waldman’s in Hughesville where he retired after 31 years. Toots dedicated countless hours to the grounds care at Lime Bluff Park where he mowed weekly for many years. He also helped in the Lion’s Club’s annual sauerkraut making where he was the machete wielder and chopped thousands of heads of cabbage. He was a lifelong member of the Mt. Zion Lutheran Church and the go-to person for most everything. Toots and Arlene loved to go camping back in the day. They started out with a Harley and a tent and progressed to a pickup truck with a cap, and then finally a travel trailer. They toured all over the U.S. and even drove to Alaska in 1988. Toots was an avid hunter and still hunted every year at the family cabin. He harvested a doe his last year hunting. We may have caught him napping a time or two, but as he always told us, he was just resting his eyes. Toots could often be found riding through the woods, fields and back roads on his Ranger with his chain saw in the back. He could trim out trails for hours on end or just spend his time enjoying God’s beautiful creation. Toots’ main concern and the center of his universe was always his faith and his family. On his 89th birthday, his only wish was for his granddaughter Jess, to have a baby. She and Paul were able to make that wish come true for him, and the day he turned 90, they told him they were expecting. In addition to his parents, Toots was preceded in death by his brothers, Jacob, Clayton, Grant, Monroe, Donald and Bruce; as well as two sisters, Murl and Glenna. Toots is survived by his wife Arlene of 60 years, which they just celebrated on Nov. 3. Also surviving are two daughters, Joan Hunter and Ann (Scott) Milheim; three grandchildren, twins, Lone (Regina) Hunter and Lynn Hunter and Jess (Paul) McCoy; and four great-grandchildren, Ethan, Lucas, Ella and Reese. He is also survived by one sister, Elva Mae Worthington. The family will hold a private viewing and graveside service at their convenience. Arrangements have been entrusted to McCarty~Thomas Funeral Home, Hughesville. Memorial contributions can be made to Mt. Zion Lutheran Church, Hughesville in care of Pat Lauchle. Expressions of sympathy may be sent to the family at www.mccartythomas.com.

Clarence (Toots) Larue Barto, 94 of Hughesville, passed away Friday, Nov. 5. Born April 22, 1927, he was the son of the late Jacob and Hazel (Reese) Barto. Toots worked for Henry Buck in the &#8216;50s before becoming employed... View Obituary & Service Information

The family of Clarence Larue Barto created this Life Tributes page to make it easy to share your memories.

Send flowers to the Barto family.