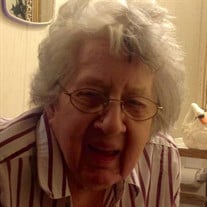 Cecelia M. Tironie, 93, of Hughesville, died Wednesday, December 13, 2017 at Skilled Nursing & Rehabilitation Center, Muncy. She was the wife of the late Bernard C. Tironie, who died October 29, 2012. They were married on February 7, 1977. Born May 7, 1924 in English Center, she is the daughter of the late Claude and Jesse (Hoppis) English. Prior to her retirement, she was employed at Sylvania, Halls Station, until its closing. Prior to that, she was employed at Muncy Valley Hospital in the housekeeping department. Cecelia enjoyed watching various wildlife and the natural beauty of her surroundings from her home. She was kind, caring, and compassionate towards all living things. Surviving is a brother, Walter (Peggy) English of Williamsport; a special friend, Sandra (Craig) Knipe of Cogan Station; her caregivers, Cindy (David) Shearer of Hughesville, and Lela Hawley of Williamsport; and several nieces and nephews. In addition to her husband and parents, she was preceded in death by a step-father, Grover Updegraff; four brothers, Boyd, Lemons, Hazey, and Harry; and three sisters, Stella, Alice, and Desdamana. A memorial service will be at 1 p.m. on Monday, December 18 at McCarty-Thomas Funeral Home, 557 E. Water Street, Hughesville, with Pastor Salvatore A. Minnella, Jr. officiating. Burial will be in Fairview Cemetery, at the convenience of the family. Visitation will be one hour prior to the memorial service on Monday. In lieu of flowers, memorial contributions may be made in Cecelia's name to Lycoming Animal Protection Society (LAPS), 195 Phillips Park Dr, Williamsport, PA 17702. Expressions of sympathy may be sent to the family at www.mccartythomas.com

Cecelia M. Tironie, 93, of Hughesville, died Wednesday, December 13, 2017 at Skilled Nursing & Rehabilitation Center, Muncy. She was the wife of the late Bernard C. Tironie, who died October 29, 2012. They were married on February 7, 1977.... View Obituary & Service Information

The family of Cecelia M. Tironie created this Life Tributes page to make it easy to share your memories.

Send flowers to the Tironie family.