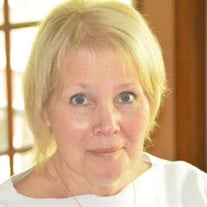 Carole Heckel sailed beyond the horizon into eternal life from her home in Hughesville on Thursday, June 28th, 2018. A daughter of the late Cecil and Catherine Anderson Stewart, she was born in Fairview, PA. She joins her parents and her older sister Jane in eternal rest. She was a 1979 graduate of Fairview High School, and earned Bachelor of Science (1983) and Master of Education (1984) degrees from Penn State in Counselor Education. She was a life member of the Penn State Alumni Association, and a member of Pi Lambda Theta, a national honor society for educators. Professionally she served as a school counselor in the Newport School District for 2 years, and then in the Williamsport Area School District for 32 years, retiring in 2017. She served in many various capacities at Williamsport High School, including the CARE (Crisis Assistance Referral Effort) Team, a core group that aids students who are in crisis; the Peer Helper Team, of which she was an organizer and leader, as well as serving on the PA State Peer Mediation Board of Directors; was an assistant with graduation exercises; coordinated programs through the school counseling office to assist students; and chaired the graduation awards committee for many years. On June 2nd, 1984 she married Mark Heckel, and started a family with him in Hughesville. Together, they raised two sons, Kreg Thomas Heckel, a Penn State student, and Kade Mathias Heckel, a plebe at the US Naval Academy at Annapolis, both of whom she was very proud. She was a double Eagle Scout Mom, and took great pride and pleasure in watching "her boys" represent Hughesville in band and chorus performances, athletic events and academic pursuits. She was active as a band parent, and as an athletic parent supporting football, wrestling and track and field. Her passion was travel, and she saw Europe, Mexico, the Caribbean, Canada and many places across the United States. Her family includes her brothers Robert (Debra) Stewart of Mancos, CO, and Donald (Donna) Stewart of Upper Dublin, PA; Nephew Micheil Stewart (Seattle, WA); Nieces Lori Kapferer (West Orange, NJ), Andrea McGeary (Durham, NC) and Betsy Stewart (Los Angeles, CA) and four great nieces and nephews. A true servant leader, she provided more than just guidance and counseling. She was a superior example of the selfless, student-centered educator who truly cared about her students. She will be missed by her students and their parents. Throughout her career, Carole sought out the best in people and her students. She actively worked as an advocate for student success, and in aiding students to find the right career or educational path for their life after high school. For nearly two decades, she coordinated the scholarship program at Williamsport Area High School, doing her best to reward and acknowledge hard work and success through meaningful awards to students. In lieu of flowers and to honor her memory, a scholarship for the Hughesville High School Valedictorian has been established. Contributions may be made to the "Carole Heckel Memorial Scholarship for the Valedictorian" Fund, East Lycoming Education Foundation, 349 Cemetery St., Hughesville, PA 17737. Funeral services will be held 10 a.m. on Tuesday, July 3, 2018 at McCarty-Thomas Funeral Home, 557 E. Water Street, Hughesville. Burial will follow in Pleasant Hill Cemetery, Hughesville. Visitation will be Monday, July 2, from 6 to 8 p.m. at the funeral home. Expressions of sympathy may be sent to the family at www.mccartythomas.com

Carole Heckel sailed beyond the horizon into eternal life from her home in Hughesville on Thursday, June 28th, 2018. A daughter of the late Cecil and Catherine Anderson Stewart, she was born in Fairview, PA. She joins her parents and her older... View Obituary & Service Information

The family of Carole S. Heckel created this Life Tributes page to make it easy to share your memories.

Carole Heckel sailed beyond the horizon into eternal life from...

Send flowers to the Heckel family.