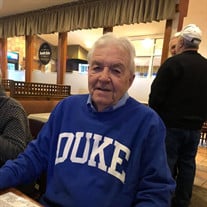 Carmine A. “Carm” Grieco, of Hughesville, passed away on Friday, January 7, 2022, at UPMC Muncy. Carm was born on January 29, 1935, in Lock Haven, and is the son of the late Carmine and Gertrude M. Grieco. While in Lock Haven, Carm played for the Little Team baseball team. He played in the very first Little League finals in 1947 where he claims he had 2 doubles against the Maynard team. Carm was very proud of his Little League heritage and threw out the first ball at the Little League World Series in 2017. If you were his friend, you likely had a Little League baseball hat or t-shirt that he gifted you. Carm’s family opened Community Drug Store in Williamsport when Carm was in his early teens. He graduated from Williamsport High School in 1952 and went on to graduate Lycoming College in 1957. Carm was an avid supporter of Lycoming College sports and spent many afternoons at Lycoming football games. Carm married Patty Stanton at St. Ann Catholic Church in 1957. They moved to Hughesville where Carm began his teaching career at the Wolf Elementary School. Carm taught for 35 years where he made the most impact on the lives of his Hughesville family. During the early years, he and Patty were focused on improving the community by being lifeguards at Beaver Lake where they taught kids how to swim and play a lot of cards with their parents. Carm and Corder Davis organized an elementary football league called the Colts vs Bears where he was the quarterback and coach. Some of his other activities and accomplishments were: Little League Coach, running various summer camps, painting company, Jr. High and Varsity Basketball Coach, organizer of the Crawley Street Golf Tournament, local sportswriter for The Shopper, member of the Hughesville High School Athletic Hall of Fame and West Branch Hall of Fame committees. He gave several people their lifelong nicknames (Giver, Digger, Runo, Buck, Johnny Guitar, etc) and enjoyed attending all his children’s and grandchildren’s sporting and dancing events. After retirement, Carm ran a sports apparel company called “CarmCo”. During his retired years, he spent a lot of time with his friends golfing, attending sporting events, and lunching at Orlie’s and Mulberry Street Café. He never forgot his students and always loved running into people and reminiscing. Carm was always proud to help children with their studies and the “important lessons” in life. He was very direct and honest and had a way of connecting with people. He loved to give of himself and it was rare to walk away from Carm without a new hat, shirt, $10, a soda or a box of cookies. He is survived by a daughter, Tami (Joseph) Cannici of Huntersville, NC; three sons, George (Jill) Grieco of Williamsport, Tim Grieco of Williamsport, and Vince (Mary) Grieco of Hughesville; two brothers, Larry (Tess) Grieco and Tom (Beth) Grieco; nine grandchildren, Dawn, Courtney, Natalie, Ashley, the late Geordan, Logan, Nick, Kassi and Gracie; 8 great grandchildren. In addition to his parents, Carm was preceded in death by his first wife Patricia Ann Stanton on April 11, 1996, with whom he shared 39 years of marriage, Carm’s second wife, the former Ruth E. Calistri, on April 23, 2020, and by two brothers, Henry and Brian Grieco. Carm’s family is planning on holding a Celebration of Life which will be announced later. Burial will be held privately in Resurrection Cemetery, Montoursville, with Rev. Glenn McCreary officiating. In lieu of flowers, the family suggests contributions to Carm and Pat Grieco Memorial Award C/O Vincent Grieco 375 Chel Dr. Hughesville, PA 17737. Arrangements have been entrusted to McCarty~Thomas Funeral Home, Hughesville. Expressions of sympathy may be sent to the family at www.mccartythomas.com.

The family of Carmine A. "Carm" Grieco created this Life Tributes page to make it easy to share your memories.

Carmine A. “Carm” Grieco, of Hughesville, passed away on Friday,...

Send flowers to the Grieco family.