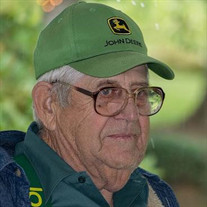 Carl Wayne Kepner passed away Friday, April 26, 2019, in Williamsport, due to complications from a recent surgery. He was 83. Wayne was born on August 16, 1935, on the family homestead in Penn Township, a son of Harley W. and Edna M. Poust Kepner. He attended Fribley School, which was adjacent to the family farm property and his family provided room and board for Fribley School teachers in the winter months. Upon completion of his compulsory education, Wayne joined his father in working the family farm. Wayne worked as a Penn Township Supervisor for a number of years. He took pride in the upkeep of the township roads. Wayne worked especially hard to keep the roads clear in January 1970, to insure a safe trip to the hospital for the birth of his nephew, Steve. In recent decades, Wayne’s haying and sweet corn operations were robust. He always appreciated the help of family, friends, and neighbors during hay season. Wayne married Ruth J. Foust on February 26, 1972. Wayne and Ruth were married for 25 years before her death in 1997. While they did not have children, they had a beloved German Shorthair, Ruby, who was an ever faithful companion to both and was sure to be in the truck with Wayne, spotlighting for deer on the dirt roads of Penn Township. Wayne was an avid deer hunter, had a lively sense of humor (evident through the pranks he liked to pull on those close to him), and enjoyed a good homemade pie. Wayne is survived by his brother, Dale (Rhea) Kepner, niece Lori (Gary) Gibson, nephew Steve (Lee-Ann) Kepner, all of Penn Township, nephew William E. Kepner, Jr., of Dushore, and niece Shari (Chris) Kepner Edmisten, of Park County, Montana. Additionally, Wayne is survived by great nieces and great nephews Kayla Gibson, of Yellowstone National Park, Ryan Kepner, of Warrensville, Lane Gibson, Jason Kepner, and Luke Kepner, of Penn Township, and Delaney Taylor, Sydney Taylor, and Dylan Taylor Wayne was predeceased by his parents, an infant brother, Harold, wife Ruth, brother William “Bill” E. Kepner, and close nephew, Wayne Stugart. Funeral services will be held 2 p.m. Monday, May 6, at McCarty-Thomas Funeral Home, 557 E. Water St., Hughesville, with Rev. GayAnn Gearhart officiating. Burial will follow in Mt. Zion Cemetery, Hughesville. Friends may call from 6 to 8 p.m. Sunday, May 5, at the funeral home. Expressions of sympathy may be sent to the family at www.mccartythomas.com.

Carl Wayne Kepner passed away Friday, April 26, 2019, in Williamsport, due to complications from a recent surgery. He was 83. Wayne was born on August 16, 1935, on the family homestead in Penn Township, a son of Harley W. and Edna M. Poust... View Obituary & Service Information

The family of Carl Wayne Kepner created this Life Tributes page to make it easy to share your memories.

Send flowers to the Kepner family.