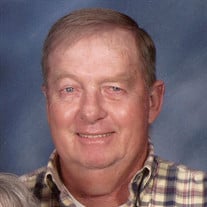 Carl LaRue Reece, 77, of Moreland Twp. died Sunday, January 14, at the Skilled Nursing & Rehabilitation Center, Muncy. Carl was the husband of Bonnie L. (Faus) Reece and were married on March 12, 1959. Born May 23, 1939, in Williamsport, he is the son of the late Donald E. and Margaret (Shipman) Reece. Prior to his retirement, he was employed at Sprout-Waldron of Muncy as a Tool & Die Maker. Carl was a member of Moreland Baptist Church. He was a farmer at heart and enjoyed milking cows and collecting toy John Deere Tractors. He loved to ride motorcycles, four-wheelers, and snowmobiles. He also liked steam engines, trains, and cutting and spitting wood. Carl was a great mechanic and enjoyed fixing almost anything. Surviving in addition to his wife Bonnie are a daughter, Annette E. (Jeffrey) Sheets of Muncy; a son, Lynn L. (Constance) Reece of Muncy; a grandson, Travis J. (Amanda) Sheets; a granddaughter, Samantha J. (Shane) Strayer, and two great-grandchildren, Lacey A. and Reece E. Strayer; and a sister, Donna L. (Paul) Shaner of Muncy. The funeral will be held at 11 a.m. on Friday, January 20 at Moreland Baptist Church, 118 Moreland Baptist Road, Muncy, PA with Rev. Robert Ingraham officiating. Burial will be in Moreland Baptist Cemetery. Visitation will be at the church on Friday, from 9:30 to 11 a.m. prior to the funeral service. In lieu of flower, memorial contributions may be made in Carl’s name to the American Diabetes Association at www. donations.diabetes.org/Donate-Now Expressions of sympathy may be sent to the family at www.mccartythomas.com

The family of Carl LaRue Reece created this Life Tributes page to make it easy to share your memories.

Send flowers to the Reece family.