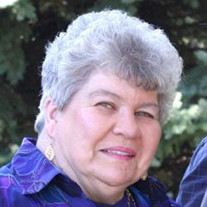 Barbara A. Phillips, 74, of Pennsdale, died Sunday, March 20, 2016 at Williamsport Regional Medical Center. She was the wife of Donald M. Phillips, who were married on December 24, 1959. Donald preceded her in death on October 23, 2015. Born January 17, 1942 in Muncy, she is the daughter of the late Howard W. and Meryl L. (Reese) Elliott. Prior to her retirement she was employed for 44 years as a Licensed Practical Nurse at the Muncy Valley Hospital. Barbara was a member of Bethany United Methodist Church, Hughesville, and active in Bethany Church Women's Group. She is the former President of Pennsdale Volunteer Fire Company Ladies Auxiliary. She enjoyed crafting and painting, and especially spending time with her family. Barbara was an avid baker and won awards at the annual State Farm Show Angel Food Cake contest. Surviving are a daughter, Christine E. (Joseph) Baur of Hughesville; a son, David M. (Lisa) Phillips of Lancaster; four grandchildren, Kyle A. Wagner, Zachary M. Phillips, Emily R. Russell, and Jacob H. Russell. In addition to her parents and husband, she was preceded in death by a Sister, Betty L. Keefer, and a grandchild Baby Wagner. A memorial service will be held at 7 p.m. on Thursday, March 24 at Bethany United Methodist Church, 111 South Second Street, Hughesville, with Pastor Jane L. O’Borski officiating. Interment will be private at the convenience of the family. Friends may call from 6 to 7 p.m. on Thursday at the church, one hour prior to the service. In lieu of flowers, memorial contributions may be made in Barbara’s name to Bethany United Methodist Church, 111 South Second Street, Hughesville, PA 17737. Arrangements have been entrusted to McCarty-Thomas Funeral Home, Hughesville. Expressions of sympathy may be sent to the family at www.mccartythomas.com.

Barbara A. Phillips, 74, of Pennsdale, died Sunday, March 20, 2016 at Williamsport Regional Medical Center. She was the wife of Donald M. Phillips, who were married on December 24, 1959. Donald preceded her in death on October 23, 2015. Born... View Obituary & Service Information

The family of Barbara A. Phillips created this Life Tributes page to make it easy to share your memories.

Send flowers to the Phillips family.