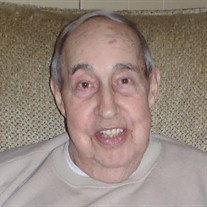 Albert D. “Al” Lund, 82, of Elkland Twp. died Sunday, August 28, 2016 at Dar-Way Elder Care, Estella, with his family by his side. Born January 3, 1934 in West Point, PA, he is the son of the late Charles J. and Edna (Voce) Lund. He was preceded in death by his wife, Jacolyn Marie (McGinley) Lund in 1987. Al owned and operated a landscaping business in Hatfield, PA. When he moved to Forksville, he worked for Larry Epler Construction, New Albany, and later worked for Dennis McCarty Pallet Manufacturing. Al also worked for Brookledge Carriers where he retired from at the age of 62. Surviving are three sons, Jacob C. (Maria) Lund of Forksville, John A. (Connie Copeland) Lund of Forksville, Eric T. Lund of Benton, 13 grandchildren and 27 great grandchildren. In addition to his parents he was preceded in death by two daughters, Aletha and Allison Lund; two sisters Florence and Eleanor; and three brothers, Charles, Raymond, and Robert Lund. A memorial service will be at 11:00 am on Saturday, September 3, at the Living Hope Fellowship, , with Pastor Scot Magann officiating. Burial will be private at the convenience of the family in Whitemarsh Memorial Park, Ambler, PA. In lieu of flowers, memorial contributions may be made to the Living Hope Fellowship, 3299 Route 4008, Forksville, PA 18616. Arrangements are entrusted to McCarty-Thomas Funeral Home, Dushore, PA. Expressions of sympathy may be sent to the family at www.mccartythomas.com

The family of Albert D. "Al" Lund created this Life Tributes page to make it easy to share your memories.

Send flowers to the Lund family.